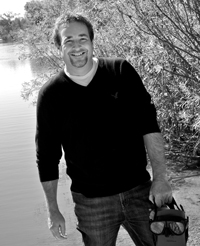 Ric Mixter was  awarded for 20 years of maritime preservation by the Association of Great Lakes Maritime History.  He has produced over 30 shows on local history for PBS and the Outdoor Channel and has appeared on the History and Discovery Channel as a shipwreck expert.  Energetic and animated, he has changed the way lecturers share history.  From interactive video links to rare interviews and underwater video, Mixter is in a class all by himself on the lecture circuit.  Follow this link for his lecture topics.

Lecture Topics:
Bombs Away
Michigan’s airfields have launched biplane aces, the Tuskegee Airmen, and one of the longest bombing missions in history.  Join Ric as he shares rare footage and interviews with the men (and women) who made history at our local airbases.  Featuring profiles of Selfridge, Kincheloe, Sawyer and Wurtsmith Air Force Bases.   Includes a special section on diversity and the battles fought here in the US by black pilots.

Offshore Outposts
Remote lighthouses mark dangerous shoals throughout the Great Lakes.  Ric Mixter showcases the most remote spots, including a visit to Huron Island, Spectacle Reef and exploration of the explosion at Stannard Rock lighthouse.  Includes the first ever interview of the survivor of Stannard Rock as well as the incredible renovations of offshore lights at St. Helena Island and DeTour Reef.
Cement Boat:  The End of an Era
Based on our documentary by the same name, this program is an hour long look one of the last remaining Cement Boats.  Ric shows how Michigan’s limestone is turned into cement and how it is transported by bulk freighter.  This lecture shares what it is like to work aboard a Great Lakes ship and some of the pluses and minuses of the lifestyle.  Ric includes behind the scenes secrets of what it takes to film on a freighter, from climbing the smokestack to filling the holds with cement.  Includes rare footage of the Huron Cement boats!
Cutter Rescues
An incredible tribute to powerful cutters that protect our inland seas!  Featuring the stories of the Escanaba, Mackinac, Hollyhock, and Sundew.  Ric was invited to break out the Soo Locks aboard the Mighty Mac and also toured on the Sundew during its final winter run near Duluth.  This lecture also chronicles the amazing rescues of the shipwrecks Cedarville, Nordmeer, Henry Cort,  and Carl D. Bradley.  Featuring rare interviews and never-before-seen newsreel footage of the Cort, Mackinac, Hollyhock and Bradley.

Gales of November
November gales are notorious for their toll on Great Lakes shipping.  Hundreds of ships now line the bottom of the lakes due to storms that brew up in a moment’s notice.  Join author/producer Ric Mixter as he dives into the mystery of late-season storms, not only sharing rare eyewitness interviews but also award-winning video that he has recorded underwater.
•    Lake Superior’s 1905 Gale, which beached several freighters including the Mataafa and Lafayette.
•    The 1913 Storms:  12 ships completely disappeared and over 240 sailors were lost in a storm that sank ships on every Great Lakes except Ontario.
•    The 1940 Storm:  Three ships destroyed and an amazing rescue of 17 Canadian sailors by Michigan fishermen near Pentwater.  Includes rare film footage of the rescue!
•    The Daniel J Morrell:  Ripped in two off Michigan’s thumb in 1966 with only one survivor.
•    The Carl D. Bradley:  Two men survived the freighter breaking up in Lake Michigan
•    The Edmund Fitzgerald:  Rare underwater footage from Ric’s visit to the Fitz in 1994.
Deep Six (new for 2009)
Featuring the largest shipwrecks in the Great Lakes, from the Edmund Fitzgerald and William Moreland in Lake Superior to the Daniel J Morrell and Cedarville in Lake Huron.  This was the first documentary to feature Lake Michigan’s largest wreck, the Carl D. Bradley.  Ric also highlights the 1913 storm, which sent 12 ships to the bottom over one weekend.  The 500 footers James Carruthers and Henry Smith are still missing.  Also new is underwater footage and a survivor interview from Lake Erie’s largest shipwreck, the James Reed.  This lecture also features how research brought in the rare interviews and how the re-enactments were filmed with a homemade liferaft made from hotpepper barrels.