For more than two decades Larry B. Massie has shared a passion for his beloved state’s heritage. He has authored 20 best-selling Michigan history books (the latest one was released in November of 2009) and lectures to audiences at schools, libraries, universities and festivals across both peninsulas. His acclaimed storytelling about strange but true episodes conveys listeners on a fun-filled, magic carpet ride into Michigan’s past. He brings to life steel-sinewed voyageurs, rough-hewn lumberjacks, salty Great Lakes ships captains, and others who helped make Michigan a great state. Larry was recently presented with the “Lifetime Achievement Award” by the Historical Society of Michigan. He adapts his fast paced, 45 minute to one hour performances to all age groups and types of audiences.  Here’s a list of his lecture topics.

Larry and his wife Priscilla often times work as a team.  Together they authored the award winning cookbook “Walnut Pickles & Watermelon Cake: A Century of Michigan Cookery”. Priscilla is also the host of the “Made in Michigan” cooking show seen on the CBS Network affiliate, WWMT. For more information about Priscilla and her programs, follow her link in the Speaker Profile section. 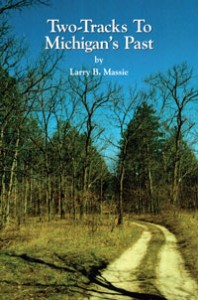 New Release: The 11th book from Massie’s bestselling Voyages Into Michigan’s Past Series
Welcome to the eleventh volume in the Voyages Into Michigan’s Past series. Visit Mackinac Island in the heyday of the fur trade with Harriet Martineau, Anna Jameson and other sophisticated literary ladies. Get to know the Husseys of Battle Creek, intrepid Underground Railroad conductors. March with little Johnny Clem, the “Drummer Boy of Chickamauga,” and Detroit-born Chaplain Corby who absolved the Irish Brigade at Gettysburg. And return to many another episode in Michigan’s vibrant past. For further information email the Massie’s at mihistory.massie@gmail.com or call 269-673-3633.